Notes from the Editors, March 2002

In January, with no public discussion and little fanfare, Washington began the first major extension of its war on terrorism beyond Afghanistan by sending U.S. troops into the Philippines. The contingent of nearly 700 troops, including 160 Special Forces soldiers, was sent to the Autonomous Region of Muslim Mindanao (ARMM), which consists of a number of islands and one major city, and is populated chiefly by a few million Moros (Muslim Filipinos). The mission of the U.S. forces has been to assess the military situation, provide military advice, and train the 7000 Philippine soldiers currently pursuing the guerrillas of the Abu Sayyaf Group (ASG) operating in the southern islands of Basilan and Jolo 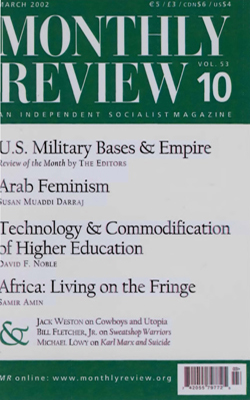