Notes from the Editors, October 2000

In an article on the role of third parties in U.S. presidential elections in the August 21, 2000, issue of In These Times, founding editor and publisher James Weinstein…[argued] that [Henry A.] Wallace's 1948 Progressive Party campaign…was doomed to a natural devolution as the election neared—in what could be regarded as a historical law for third-party movements in U.S. politics. But missing from this argument, astonishingly, was the main reason for the Progressive Party's rapid decline, which had nothing to do with any law of natural devolution of third-party movements but rather grew out of the most virulent redbaiting presidential campaign in U.S. history, setting the stage for the full-fledged McCarthyism that followed. 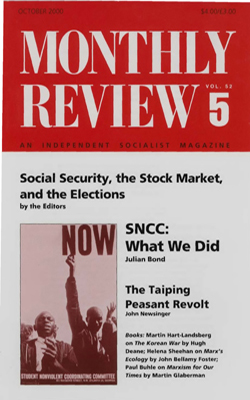