This is a somewhat abbreviated version of an interview published in the British journal Radical Philosophy (No. 62). The interview was conducted by Chris Arthur and Joseph McCarney in April 1992 and is included here with permission. Introducing the interview, the editors wrote as follows: "István Mészáros left Hungary after the Soviet invasion of 1956. He recently retired from a Chair in Philosophy at the University of Sussex. He established his reputation in the English-speaking world with his widely translated Marx's Theory of Alienation, (1970), which was awarded the Isaac Deutscher Memorial Prize. His work has been particularly well received in Latin America, and The Power of Ideology (1989), his most recently published work, was highly acclaimed both in Britain and abroad. Mészáros' thought is characterized by a fiercely combative Marxism, and a socialist commitment undiminished by recent events. He is currently developing some original ideas about the theory and practice of the transition to socialism. His forthcoming book, Beyond Capital: Towards a Theory of Transition, will be published by the Merlin Press next spring. —The Editors 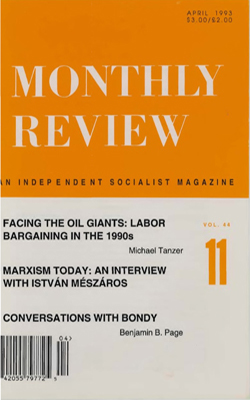