The Angler and the Octopus

Ever since the United States divided the Korean peninsula in 1945, North Korea has had to cope with the existential challenge of U.S. hostility. Korea marks the western boundary of the empire, a border area where the sea power of the United States adjoins the land power of Russia and China. North Korea has been able to utilize this liminality to create a sovereign state—the Democratic People's Republic of Korea—whose independence is not welcomed by either Moscow or Beijing but tolerated because the alternatives, a client of the other or absorption into the U.S. empire, are considered worse. Washington, as global hegemon, has been less willing to tolerate this independence but has faced constraints. The result has been a policy of hostility, of unrelenting diplomatic and economic war of varying intensity, stopping short of actual kinetic war, though never far from it. 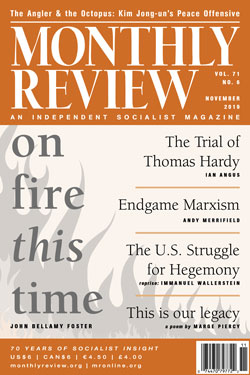