"She Was My Kind of Scientist"

Margaret Benston and the Political Economy of Women's Liberation

In the late 1960s, the North American women's liberation movement was reaching a highpoint of activity, its militancy complemented by a flourishing literature. This was the environment into which Margaret Benston's 1969 Monthly Review essay, "The Political Economy of Women's Liberation," struck like a lightning bolt. At the time, many in the movement were describing women's situation in terms of sociological roles, functions, and structures—reproduction, socialization, psychology, sexuality, and the like. In contrast, Benston proposed an analysis in Marxist terms of women's unpaid labor in the family household. In this way, she definitively shifted the framework for discussion of women's oppression onto the terrain of Marxist political economy. 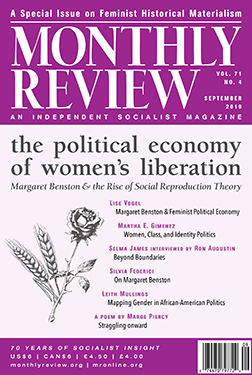