From Transitional Justice to a People's Tribunal

Building on decades of struggle, the January 2011 Tunisian uprising triggered a wave of popular revolt that spread across North Africa and West Asia. After the uprising, Tunisia became the focus of a celebrated project of transitional justice, which is now the globally mandated method of reconciling victims and perpetrators following a nonrevolutionary regime change. However, Tunisia's process of transitional justice must be critically examined. The very paradigm employed—that is, the rule of law that transitional justice consistently seeks to impose—is skewed in favor of imperial interests, which can be traced to the paradigm's origins in the mid–twentieth century victory of European powers over Nazi Germany and its allies. There are other models of justice, however, that are not rooted in this Eurocentric victor's history, but instead derive from revolutionary traditions. A key one is the People's Tribunal, used since the late 1960s. The convening of a People's Tribunal in Tunisia could help amplify and extend the popular-justice claims that surfaced during the country's recent transitional-justice process. Establishing such a tribunal might help build a symbolic reservoir and organizational force that could ultimately contribute to substantial revolutionary change in the country. 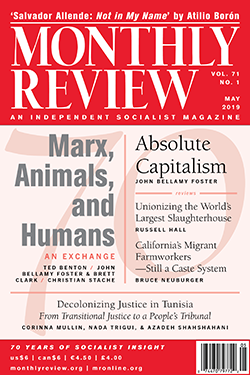