The Rhetoric and Reality of the Trans-Pacific Partnership: A View from China

Since announcing its foreign policy "pivot to Asia" shortly after the election of Barack Obama, the United States has made extensive use of its institutional and discursive power to encourage denationalization among developing countries whose economies chiefly rely on manufacturing and trade—part of its global strategic goal of expanding the hegemony of finance capital at the lowest possible cost. The development of the Trans-Pacific Partnership (TTP) is a case in point. This article analyzes the TPP's strategy in targeting China, pointing out that the TPP is a battle for the terms of economic development and discourse in the twenty-first century, as well as an illustration of the ideology of technocracy and soft power. Lastly, we criticize the TPP's erosion of economic sovereignty, which would effectively relegate the economies of developing countries to a form of semi-colonial extraterritoriality. 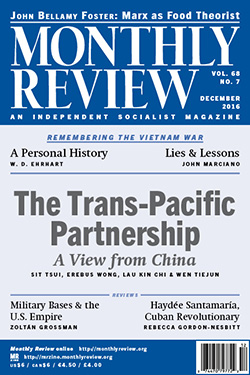