Kevin B. Anderson, Marx at the Margins: On Nationalism, Ethnicity and Non-Western Societies, expanded edition (Chicago: University of Chicago Press, 2016), 344 pages, $25, paperback.
Recent years have seen the development of a fresh area of research into Marx's critique of political economy, based on his previously unpublished economic manuscripts and notebooks, which have been made newly available in the updated edition of the complete works of Marx and Engels, the Marx-Engels-Gesamtausgabe (MEGA). Lucia Pradella published the first detailed analysis in English of Marx's London Notebooks, and Brill's Historical Materialism book series recently celebrated its hundredth volume with a translation of Marx's original manuscript for volume 3 of Capital, based on the new MEGA edition. The same series also published Heather Brown's Marx on Gender, which drew extensively on his late notebooks. And earlier this year, the second, expanded edition of Kevin Anderson's Marx at the Margins: On Nationalism, Ethnicity and Non-Western Societies appeared. The first edition of Anderson's book, published in 2010, inaugurated this new trend in Marxist studies, and it remains among the most important achievements in the field. 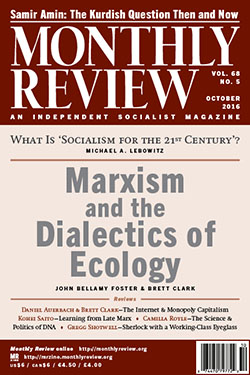