From Primitive to Substantive Equality—via Slavery

Unlike materially grounded and strictly determined primitive equality, the realization of universally shared substantive equality is feasible only at a highly developed level of social/economic advancement that must be combined with the consciously pursued non-hierarchical (and thereby non-antagonistic) regulation of a historically sustainable social reproductive metabolism. That would be a radically different social metabolism, in contrast to all phases of historical development hitherto—including of course the spontaneous primitive equality of the distant past rooted in the grave material constraints of directly imposed natural necessity and struggle for survival.… "Materiality" of that kind, despite its unquestionable substantiveness, as linked to the corresponding hemmed-in "spontaneity," is obviously not enough in order to achieve historical sustainability.… The requirement of materiality, in the case of the human being whose fundamental existential substratum is objectively determined nature, is essential. The seminal condition of materiality with regard to equality can be swept aside or wished out of existence—as a rule in a revealingly discriminatory and class-bound self-serving way—only by some idealist philosophical conception; one that predicates the commendability of some kind of equality (e.g., "in the eyes of God" or "before the Law") and at the same time denies the realizability of materially embodied substantive equality, in its defense of a most iniquitous social order. 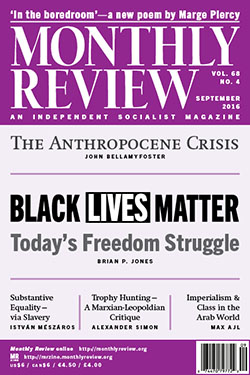