Multinational Corporations and the Globalization of Monopoly Capital: From the 1960s to the Present

In 1964, Paul Baran and Paul Sweezy wrote an essay entitled "Notes on the Theory of Imperialism" for a festschrift in honor of the sixty-fifth birthday of the great Polish Marxist economist Michał Kalecki.… [T]he essay offered the first major analysis of multinational corporations within Marxian theory. Parts of it were incorporated into Baran and Sweezy's Monopoly Capital in 1966, two years after Baran's death. Yet for all that book's depth, "Notes on the Theory of Imperialism" provided a more complete view of their argument on the growth of multinationals. In October and November 1969, Harry Magdoff and Sweezy wrote their article "Notes on the Multinational Corporation," picking up where Baran and Sweezy had left off. That same year, Magdoff published his landmark The Age of Imperialism, which systematically extended the analysis of the U.S. economy into the international domain.… In the analyses of Baran, Sweezy, and Magdoff, as distinct from the dominant liberal perspective, the multinational corporation was the product of the very same process of concentration and centralization of capital that had created monopoly capital itself. 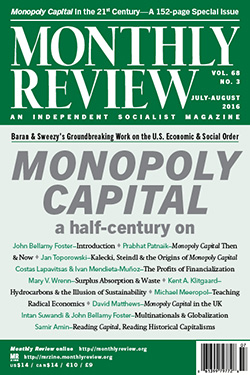