As a concept, worker precariousness is far from new. It has a long history in socialist thought, where it was associated from the start with the concept of the reserve army of labor. Frederick Engels introduced the idea of precariousness in his treatment of the industrial reserve army in The Condition of the Working Class in England. Marx and Engels employed it in this same context in The Communist Manifesto, and it later became a key element in Marx's analysis of the industrial reserve army in volume I of Capital.… In recent years, however, the notion of precariousness as a general condition of working-class life has been rediscovered. Yet the idea is commonly treated in the eclectic, reductionist, ahistorical fashion characteristic of today's social sciences and humanities, disconnected from the larger theory of accumulation derived from Marx and the socialist tradition. The result is a set of scattered observations about what are seen as largely haphazard developments.… In the face of such a confusion of views—most of them merely ad hoc responses to what is presumed to be an isolated social problem—it is necessary to turn back to the classical Marxian tradition, where the issue of precariousness was first raised. 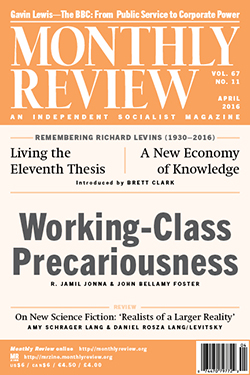