The Opt Out Revolt: Democracy and Education

In the United States today, the age of monopoly-finance capital and neoliberal politics, all aspects of social life are being financialized at breakneck speed, while the economy as a whole and employment remain lackluster. Financial flows of whatever kind are converted into "securitized" assets to be leveraged by Wall Street speculators. The data of private communications are mined. Health care is converted into a realm of super profits. Public water and electric facilities are sold to the highest bidder. The political system is turned into an open-air auction. Even pollution is treated as a market.… At the center of this juggernaut is elementary and secondary education, which receives over $550 billion in annual public spending, equal to the GDP of Belgium, ranked twenty-fifth worldwide in national income. The new copyrighted Common Core State Standards, and the accompanying standardized tests run by two multi-state consortia in conjunction with testing companies, are "high stakes" not merely for schools, teachers, and students, but also for the vested interests of capital. 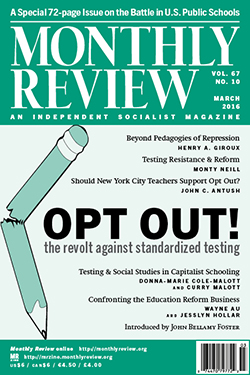