"A Torture Machine": The Violent Story of Slavery and the Beginning of American Capitalism

Edward E. Baptist, The Half Has Never Been Told: Slavery and the Making of American Capitalism (New York: Basic Books, 2014), 528 pages, $35, hardcover.
For an estimated hundreds of thousands of people, including some 60,000 workers who had served notice to their bosses, April 15, 2015, was strike day—reportedly the largest mobilization of low-wage workers since May Day of 1886, when a half million workers and their families (10 percent of the population at the time) struck for the eight-hour work day. Hundreds of us from here in Tennessee joined fast food workers, adjuncts, and home and child-care workers in the morning for strike actions, and many of us boarded buses to St. Louis and Ferguson, Missouri, for a Black Lives Matter protest that brought together strikers and supporters from all across the region. It was an intense and exact showcase of the irrevocable knot of violent and permanent racism in this country, and its broadening (and racialized) wealth and income gap and the deepening, permanent poverty of working-class life.… There is no legitimate history of this nation's past and present that can deny the twin realities of extreme economic exploitation of people of color, especially African Americans, and the incredible violence perpetrated against them. Edward Baptist's The Half Has Never Been Told draws these two realities together in his contribution to the new set of histories of U.S. capitalism, slavery, and cotton, which include Sven Beckert's Empire of Cotton and Walter Johnson's River of Dark Dreams. 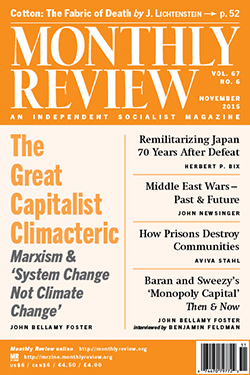