The Nonprofit-Corporate Complex: An Integral Component and Driving Force of Imperialism in the Phase of Monopoly-Finance Capitalism

According to Michał Kalecki, the imperialist system of the Keynesian era rested on a triangular structure that was composed of (a) state-financed military production (i.e., the military-corporate complex, often called the "military-industrial complex"), (b) media propaganda (media-corporate complex), and (c) a putative full-employment/welfare-oriented superstructure (Keynesianism) underpinned by the war machine, serving to justify it. Building on Kalecki's work, John Bellamy Foster, Hannah Holleman, and Robert W. McChesney provided an updated version of the theory of imperialism of the monopoly-capital tradition by laying emphasis on the primary role of the above triangle in the restructuring and preservation of the contemporary imperialist system.. Expanding on their work, I argue that one of the most significant changes in the triangular structure of contemporary imperialism is in its third pillar, particularly with the abandonment of the welfare-oriented paradigm and the adoption of the neoliberal globalization project. 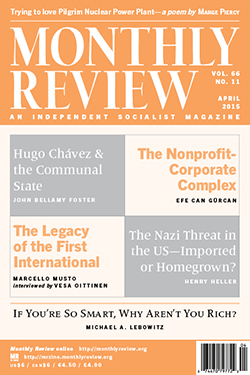