The Struggle for Scotland's Future

Chris Bambery's splendid People's History builds upon the scholarly work of others across several generations…. In Bambery's careful telling, the decisive moment in anything like modern Scottish history comes several hundred years ago. The Scots' real capitalism spread through the savage process of depopulation that Marx described so brilliantly in Capital: enclosure. Over extended decades, thousands of historic villages were literally emptied, so much so that remnants of crude huts can still be found in areas that have fewer inhabitants than sheep. The distinct language, created over thousands of years and retained with great effort in Wales, and with less effort in the rural districts of Ireland, did not need to be crudely suppressed here: the victims, pushed into the cities when not driven to early deaths, seem to have lost everything in this later period but their colorful, characteristic Scottish accents. 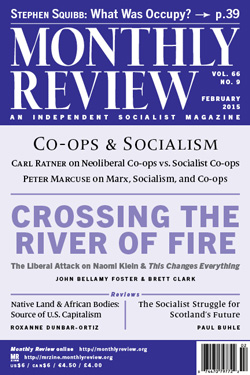