Notes from the Editors, December 2014

buy this issue
In 1832, when the global cholera pandemic was approaching Manchester—as a young Frederick Engels was later to recount in The Condition of the Working Class in England (1845)—“a universal terror seized the bourgeoisie of the city. People remembered the unwholesome dwellings of the poor, and trembled before the certainty that each of these slums would become a centre for the plague, whence it would spread desolation in all directions through the houses of the propertied class.” As a result, Engels noted, various official inquiries were commissioned into the condition of the poor. But little was done in the end to combat the social factors that facilitated the spread of the disease.… One can see an analogous situation today in the growing concern that has materialized in the United States and other wealthy nations over the Ebola epidemic in Africa. 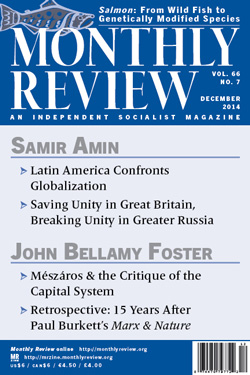