Stagnation and Financialization: The Nature of the Contradiction

More than six years after the beginning of the Great Recession in the United States, and nearly five years since it was officially declared over in this country, the core economies of the capitalist world system remain crisis-ridden. The jobs lost in the downturn in the United States have not yet been fully recovered and the economy remains sluggish. In Europe the crisis has hardly abated at all and a number of the peripheral European Union countries are in what can only be called a depression—especially Greece, Spain, and Portugal. The last member of the triad of advanced capitalist centers, Japan, has gone through what have been called two "lost decades" of slow growth and deflation and is attempting once again to jump-start the economy through a combination of devaluation of the yen and deficit spending. 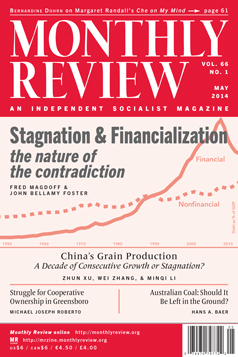