Charles Moore with Cassandra Phillips, Plastic Ocean: How a Sea Captain's Chance Discovery Launched a Determined Quest to Save the Oceans (New York: Penguin Group, 2011), 358 pages, $16, paperback.
Four decades ago, when most greens were blaming pollution on population growth and personal consumption, socialist-environmentalist Barry Commoner showed that neither could account for the radical increase in pollutants since the end of the Second World War. In The Closing Circle, he argued that "the chief reason for the environmental crisis…is the sweeping transformation of productive technology since World War II." In particular, he pointed to dramatic increases in the production and use of materials not found in nature, such as synthetics that do not degrade and therefore become permanent blights on the earth.… Bottles and bags—together with blister packs, polystyrene tubs, foam peanuts, bubble wrap, styrofoam trays, candy wrappers, and a multitude of other forms of packaging—now account for a third of the plastic produced each year worldwide. It is a bizarre and extremely irrational process: producing products that are designed to be thrown away but are made from materials that never die. The second of Barry Commoner's famous Four Laws of Ecology is: everything must go somewhere.… In his remarkable book Plastic Ocean, Charles Moore (with Cassandra Phillips) reports on the part of the "unstoppable avalanche of nonessentials" that ends up in the oceans, where it chokes and poisons fish, mammals, and birds, and endangers human life. 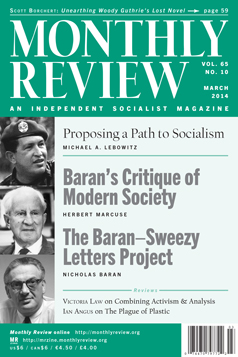