Sharp Left Turn for the Media Reform Movement: Toward a Post-Capitalist Democracy

The contemporary media reform movement exploded into prominence in the United States in 2003 as a response to the effort by the Bush Federal Communications Commission (FCC) to weaken media ownership regulations.… The size and success of this popular uprising was…a testament to the power of activism to thwart the plans of the powerful in seemingly hopeless conditions.… The Obama campaign in 2007 and 2008 expressed interest in media reform and worked closely with members of the movement…. Except for Obama's speech against the Iraq War invasion, it was arguably his communication platform that most distinguished him as a progressive in the 2008 presidential primaries.… One can debate whether this was an appropriate strategic shift at the time but there can be no debate that the strategy failed. The Obama administration abandoned its platform almost immediately, and repudiated the movement. 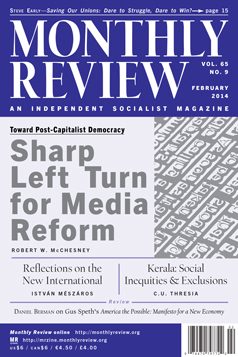