The Plight of the U.S. Working Class

Modern capitalism, sociologist Max Weber famously observed early in the twentieth century, is based on "the rational capitalistic organization of (formally) free labor." But the "rationality" of the system in this sphere, as Weber was to acknowledge elsewhere, was so restrictive as to be in reality "irrational." Despite its formal freedom, labor under capitalism was substantively unfree.… This was in accordance with the argument advanced in Karl Marx's Capital. Since the vast majority of individuals in the capitalist system are divorced from the means of production they have no other way to survive but to sell their labor power to those who own these means, that is, the capitalist class.… The result is a strong tendency to the polarization of income and wealth in society. The more the social productivity of labor grows the more it serves to promote the wealth and power of private capital, while at the same time increasing the relative poverty and economic dependency of the workers. 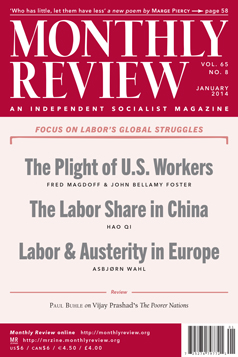