The Cultural Apparatus of Monopoly Capital: An Introduction

The past half-century has been dominated by the rise of media to a commanding position in the social life of most people and nations, to the point where it is banal to regard this as the "information age." The once-dazzling ascension of television in the 1950s and '60s now looks like the horse-and-buggy era when one assesses the Internet, smartphones, and the digital revolution. For social theorists of all stripes communication has moved to center stage. And for those on the left, addressing the role of communication in achieving social change and then maintaining popular rule in the face of reactionary backlash is now a primary concern.… political economists of communication, including one of us, identified themselves as in the tradition of radical political economy, but with a sophisticated appreciation of media that had escaped.… [the stellar critique of journalism produced… by Edward S. Herman and Noam Chomsky]. Paul Baran and Paul Sweezy were occasionally held up by political economists of communication as representing the sort of traditional Marxists who underappreciated the importance of media, communication, and culture.… We were never especially impressed by this criticism. To us, Monopoly Capital, and the broader political economy of Baran and Sweezy, far from ignoring communication, provided key elements for a serious study of the subject. [Note: this article was released in three parts: Part 1 | Part 2 | Part 3] 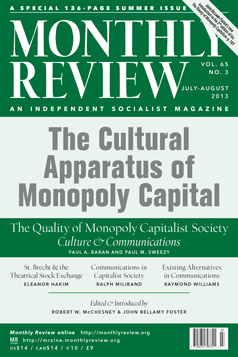