The Great Financial Crisis—Three Years On

The Great Financial Crisis began in the summer of 2007 and three years later, despite a putative "recovery," it is still having profound effects in the United States, Europe, and in much of the world. Austerity is being forced on working people in many countries. Matters are especially difficult in Greece, a country that is being compelled by the demands of bankers, including the International Monetary Fund, to squeeze its workers in return for loans from abroad to help pay down government debts. Official unemployment in the United States is still around 10 percent, and real unemployment is much higher. An unprecedented 44 percent of the officially unemployed have been without work for over six months. A record number of people are receiving government food assistance as well as meals and groceries from charities. Many U.S. states and cities, facing large shortfalls in their budgets due to falling tax revenues, are cutting jobs and reducing funding for schools and social programs 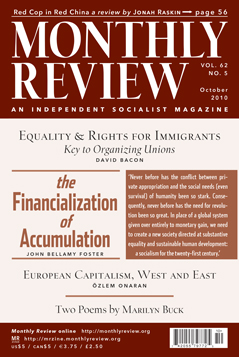