Listen Keynesians, It's the System! Response to Palley

In an article entitled "Listen, Keynesians!," published in January 1983 in Monthly Review, Harry Magdoff and Paul Sweezy argued that the radical break that John Maynard Keynes's General Theory of Employment, Interest and Money (1936) represented for orthodox economics lay in the fact that "For the first time the possibility was frankly faced, indeed placed at the very center of the analysis, that breakdowns of the accumulation process, the heart and soul of economic growth, might be built into the system and non-self correcting."…In November 1982, only two months before the publication of "Listen, Keynesians!," Magdoff and Sweezy had pointed out in "Financial Instability: Where Will it All End?" that the question as to whether a major financial crisis (on the scale of 1929) could propel the economy into a deep downturn, approaching the scale of the Great Depression of the 1930s, was still an open one. They were responding here to Hyman Minsky, a proud Keynesian (albeit with socialist leanings), "whose views," they claimed, were "especially worthy of attention precisely because over the years he has been the American economist who has done more than any other to focus on the crucially important destabilizing role of the financial system in advanced capitalist countries." 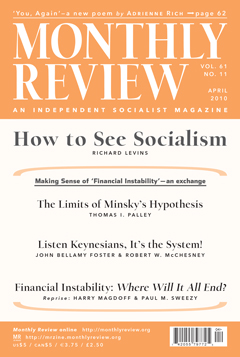