The Age of Monopoly-Finance Capital

Three years ago, in December 2006, I wrote an article for Monthly Review entitled "Monopoly-Finance Capital." The occasion was the anniversary of Paul Baran and Paul Sweezy's Monopoly Capital, published four decades earlier in 1966.…The article…[discussed] "the dual reality" of stagnant growth (or stagnation) and financialization, characterizing the advanced economies in this phase of capitalism. I concluded that this pointed to two possibilities: (1) a major financial and economic crisis in the form of "global debt meltdown and debt-deflation," and (2) a prolongation of the symbiotic stagnation-financialization relationship of monopoly-finance capital. In fact, what we have experienced in the last two years, I would argue, is each of these sequentially: the worst financial-economic crisis since the 1930s, and then the system endeavoring to right itself by returning to financialization as its normal means of countering stagnation. It is thus doubly clear today that we are in a new phase of capitalism. In what follows, I shall attempt to outline the logic of this argument, as it evolved out of the work of Baran, Sweezy, and Harry Magdoff in particular, and how it relates to our present economic and social predicament. 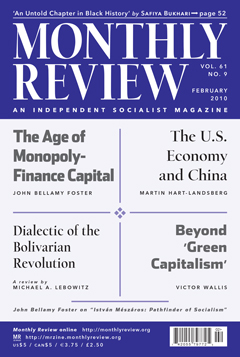