he United States is unique today among major states in the degree of its reliance on military spending, and its determination to stand astride the world, militarily as well as economically. No other country in the post-Second World War world has been so globally destructive or inflicted so many war fatalities. Since 2001, acknowledged U.S. national defense spending has increased by almost 60 percent in real dollar terms to a level in 2007 of $553 billion. This is higher than at any point since the Second World War (though lower than previous decades as a percentage of GDP). Based on such official figures, the United States is reported by the Stockholm International Peace Research Institute (SIPRI) as accounting for 45 percent of world military expenditures. Yet, so gargantuan and labyrinthine are U.S. military expenditures that the above grossly understates their true magnitude, which, as we shall see below, reached $1 trillion in 2007 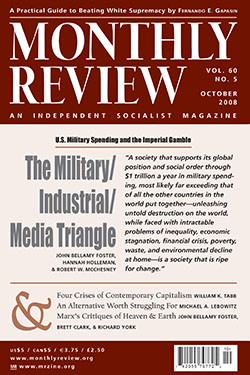