At the end of May the Bush administration announced that the United States is planning on maintaining permanent military bases in Iraq on a model like that of South Korea, where U.S. troops have been deployed in massive numbers for more than fifty years. Despite the failures associated with the U.S. invasion of Iraq, Washington is openly proclaiming to the world that it intends to do everything it can to maintain a lasting military presence in that country. By doing so it hopes to retain the main spoils won in the war and to declare it a partial victory. The strategic objectives are obvious: to control Iraq and Iraqi oil, threaten Iran, and dominate the geopolitically vital Middle East. Thus Secretary of Defense Robert Gates declared on May 31 that he did not expect the United States to withdraw from Iraq as from Vietnam “lock, stock and barrel” and invoked the example of South Korea. Earlier that week White House Press Secretary Tony Snow, conveying the views of President Bush, said U.S. troops would remain but would be in an “over-the-horizon support” role to maintain security in Iraq—with permanent bases on the South Korean model. Lt. Gen. Raymond Odierno, in charge of daily military operations in Iraq, stated on May 31 that he supported the creation of a South Korean type U.S. military presence in Iraq. The message could not be clearer and can be summed up as: Naked Imperialism: The U.S. Pursuit of Global Dominance (see John Bellamy Foster’s book with this title for an analysis of the larger forces at work). 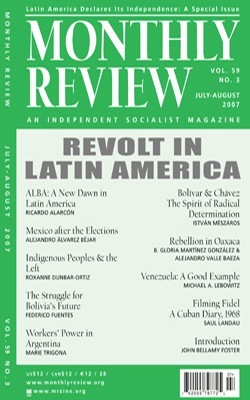