'No Radical Change in the Model'

In the 2006 presidential election campaign in Brazil, President Luiz Inácio Lula da Silva (known as Lula), leader of the Partido dos Trabalhadores (PT or Workers' Party), was interviewed at length on July 11, 2006, by the Financial Times (which also interviewed Lula's main rightist challenger Geraldo Alckmin). The interview touched on many topics but mainly concentrated on Lula's adherence in his first term of office to the global neoliberal policies of monopoly-finance capital, particularly repayment of debt and "fiscal responsibility." At two points in the interview the Financial Times bluntly asked whether Lula was looking toward a "radical change in the model," i.e., whether he and his Workers' Party intended to break with financial capital and neoliberalism in his second term of office. Lula gave them the answer they wanted: "There is no radical change in the model....What we need now, in economics and in politics, is to strengthen Brazil's internal and external security." 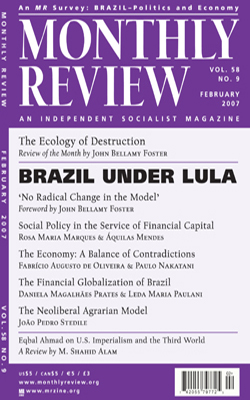