As authoritatively stated in an editorial in Nature, vol. 436, issue 7049 (July 2005), "Cuba has developed a considerable [scientific] research capability—perhaps more so than any other developing country outside of Southeast Asia." Cuba has been especially successful in establishing a biotechnology industry that has effectively introduced drugs and vaccines of its own, along with a nascent pharmaceutical industry that has achieved considerable success in exports. Its agriculture and health sectors have been strong beneficiaries of its scientific research. As Nature observed: "It is worth asking how Cuba did it, and what lessons other countries might draw from it." Indeed, the Cuban case is all the more surprising since it is not only a poor country, but one that has been confronted for decades by a ruthless embargo imposed by the United States, which has been extended to scientific knowledge. Moreover, much of Cuba's scientific progress has occurred in the decade and a half since the fall of the Soviet Union, which previously had aided it economically and technologically 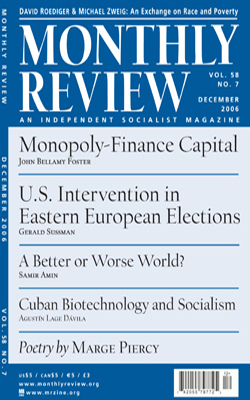