Notes from the Editors, November 2006

» Notes from the Editors
Venezuelan president Hugo Chávez's extraordinary speech to the General Assembly of the United Nations in September drew worldwide media attention not simply because he referred to the current occupant of the White House as "the devil" for his nefarious actions as the leader of world imperialism, but also because of his scarcely less heretical praise of MR and MR Press author Noam Chomsky for his book Hegemony or Survival: America's Quest for Global Dominance. As the foremost dissident intellectual in the United States, Chomsky is generally ostracized by the dominant U.S. media system, treated as a ghost-like or even non-existent figure. The establishment was thus caught off guard when Chávez's comments suddenly catapulted Hegemony or Survival into the bestseller list, along with another recent Chomsky book, Media Control: The Spectacular Achievements of Propaganda. The speed with which orders for Chomsky's books piled up in bookstores and Internet distributors across the nation demonstrated beyond any doubt that people are hungry for serious radical critiques of U.S. imperialism but seldom know where to look—since all such dissident views are deemed off limits by the ruling media-propaganda system 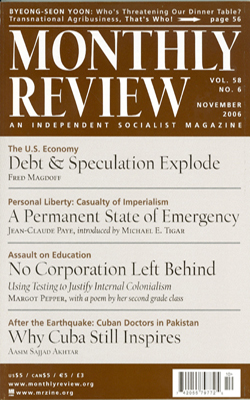