It is an inescapable truth of the capitalist economy that the uneven, class-based distribution of income is a determining factor of consumption and investment. How much is spent on consumption goods depends on the income of the working class. Workers necessarily spend all or almost all of their income on consumption. Thus for households in the bottom 60 percent of the income distribution in the United States, average personal consumption expenditures equaled or exceeded average pre-tax income in 2003; while the fifth of the population just above them used up five-sixths of their pre-tax income (most of the rest no doubt taken up by taxes) on consumption.1 In contrast, those high up on the income pyramid-the capitalist class and their relatively well-to-do hangers-on-spend a much smaller percentage of their income on personal consumption. The overwhelming proportion of the income of capitalists (which at this level has to be extended to include unrealized capital gains) is devoted to investment. 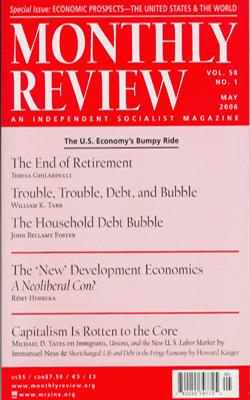