Notes from the Editors, April 2006

As we write this in late February, threats of a U.S. military intervention in Iran are intensifying in response to Washington’s claims that Iran is attempting to develop nuclear weapons capabilities. The International Atomic Energy Agency has voted to take the issue of what it views as Iran’s noncompliance with the Nuclear Nonproliferation Treaty Safeguards Agreement to the United Nations Security Council in early March. Meanwhile, the Bush administration has repeatedly stated that a military strike against Iran by the United States is now on the table. Washington’s waving of its big stick coupled with its feeding of misinformation to a U.S. media system that has not hesitated to pass these distortions on to the general public have already had their effect. A Los Angeles Times/Bloomberg poll taken in January indicated that 57% of Americans favor military intervention if Iran’s Islamic government pursues a program that could enable it to build nuclear arms (Los Angeles Times, January 27, 2006). A few days later President Bush declared in his State of the Union address that the Iranian government is defying the world with its nuclear ambitions, and the nations of the world must not permit the Iranian regime to gain nuclear weapons. America will continue to rally the world to confront these threats. 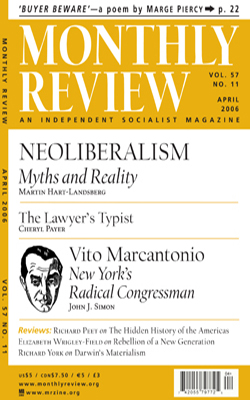