Notes from the Editors, January 2006

» Notes from the Editors
The United States is currently engaged in what the media—with no trace of irony—is calling "the national debate on torture." With the White House adamantly rejecting Senator John McCain's amendment to ban U.S. use of torture, the morality of torture has suddenly become something that can be openly and respectably "argued." Not only are certain torture techniques advocated on the grounds of their utility (see for example the November 30, 2005, column "Tortured Logic" by Jonah Goldberg, online editor for the National Review), but the executive branch is presenting arguments in court against releasing the latest photos of torture by U.S. operatives—on the grounds that public viewing of these photos would undermine the war effort. Meanwhile, Secretary of State Condoleezza Rice has been visiting European heads of state in early December 2005. Her diplomatic mission: to defend the present U.S. practice of stealing away "terror suspects" and taking them to undisclosed secret prisons in Europe and elsewhere for intensive interrogation and torture. For those seeking a grasp of the full moral and political dimensions of the current U.S. torture regime we strongly recommend the new Monthly Review Press book The Language of Empire: Abu Ghraib and the American Media by Lila Rajiva. Not only does Rajiva expose the reality of U.S. torture of prisoners, she also uncovers the media's complicity in legitimating such practices 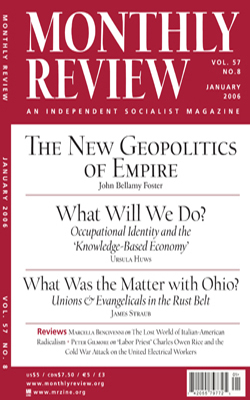