Notes from the Editors, December 2005

» Notes from the Editors
At the end of October John Bellamy Foster and Martin Hart-Landsberg (coauthor with Paul Burkett of China and Socialismand author of Korea: Division, Reunification and U.S. Foreign Policy—both published by Monthly Review Press) traveled to Mexico City to participate as representatives of Monthly Review in the Fifth Colloquium of Latin American Political Economists. John spoke on "Imperial Capital: The U.S. Empire and Accumulation." Martin presented a paper (cowritten with Paul Burkett) on "China and the Dynamics of Transnational Capital Accumulation." Among the conference participants who met with John and Martin in a special meeting for Monthly Review were Guillermo Gigliani of Economistas de Izquierda (EDI) in Argentina (see "Argentina: Program for a Popular Economic Recovery" in the September 2004 issue of MR), Alejandro Valle of Mexico, the chief organizer of the Fifth Colloquium, and Leda Maria Paulani, President of the Sociedade Brasileira de Economia Política (SEP). Our hope is that this important meeting will lead to the establishment of a strong connection between MR and Latin American political economists confronting neoliberalism. The final outcome of the Fifth Colloquium was itself a landmark event: the founding of the long-planned Sociedad Latinoamerica de Economía Política y Pensamiento Crítico (Latin American Society of Political Economy and Critical Thought). The new organization will not be simply (or mainly) an academic and professional organization but will be actively dedicated to opposing neoliberalism and to supporting political and social movements for radical change in Latin America. We salute our Latin American political-economic comrades in this important struggle 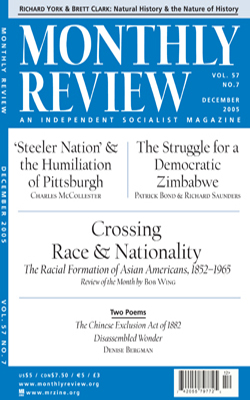