Notes from the Editors, October 2005

» Notes from the Editors
The much-anticipated split in the AFL-CIO, the labor federation in the United States, took place in Chicago, at the federation's annual convention. Three unions—the Service Employees International Union (SEIU), the Teamsters, and the United Food and Commercial Workers Union (UFCW)—left the federation, and more will likely follow. The dissident unions call themselves the Change to Win Coalition, and they have suggested that what they have done parallels the formation of the CIO in 1935, which resulted in the organization of the nation's mass production industries. They will be holding their inaugural convention in late September 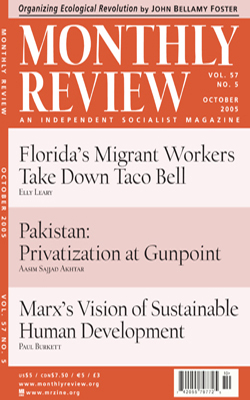