The Escalating War Against Corporate Media

A recurring issue for the left historically has been how to address the capitalist media. In recent years the problem has grown ever more severe, and no small amount of attention has been given to examining the problems of the commercial media and how closely they reinforce and accentuate problems within the broader social order. The logic of this criticism has become clear: progressives need to work on challenging the corporate domination of media as part of the broader struggle for social justice. If changing media is left until "after the revolution," there will be no revolution, not to mention fewer chances for social reform. But politicizing control over media has proven to be extraordinarily difficult for activists. That is why the massive and largely unanticipated 2003 campaign in the United States to stop further media concentration, which almost overnight reached a scale not seen in media reform struggles since the 1930s, is so important and instructive. This article chronicles that revolt. 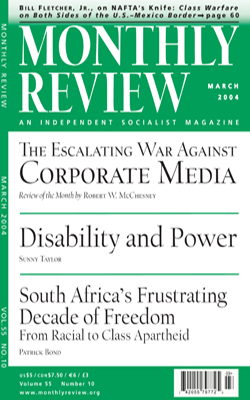