Notes from the Editors, August 2003

It took only a few months following the official ending of the Iraq War for U.S. imperial designs to unravel almost completely. The Bush administration is now under fire from the intelligence community, the media, and the political elites for having lied its way into the war with its claims regarding Iraqi weapons of mass destruction. More damaging still to administration plans, occupying troops and their Iraqi collaborators are being killed on an almost daily basis in what is now taking on the appearance of a classic guerrilla war. This would be impossible without the support offered to the insurgents by substantial sections of the Iraqi population. Consequently, the United States is being compelled to maintain larger numbers of forces than anticipated in Iraq (often by extending the duration in which military units remain in the country) and the projected term of U.S. military occupation is being drawn out 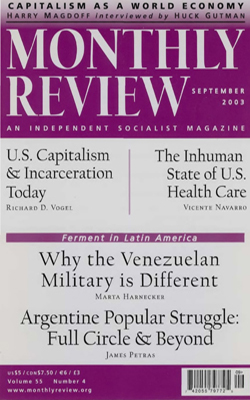