On May 3 MR will be hosting its Imperialism Today conference in Burlington, Vermont in honor of Harry Magdoff’s ninetieth birthday. Harry officially became an editor of Monthly Review thirty-four years ago this month in May 1969, when he joined Paul Sweezy as co-editor following the death of Leo Huberman in 1968. In the period since then he has edited 408 monthly issues of the magazine (counting the summer issues as double issues). MR would not be what it is today without Harry’s imprint on each and every one of these issues. During the last thirty-six of these we have shared this role with Harry. What this has driven home to us is Harry’s exceptional warmth as a human being, his brilliance as a political-economic analyst, his unlimited patience as a teacher and writer determined to communicate in plain terms, his openness to new radical vistas, and above all his personal integrity and courage, which, as with Marx, allows him to elude the traps of ideology and dispense with all fashions, acting according to the motto: Go on your way, and let the people talk (a variation on a line from Dante used by Marx at the end of the preface to the first edition of Capital) 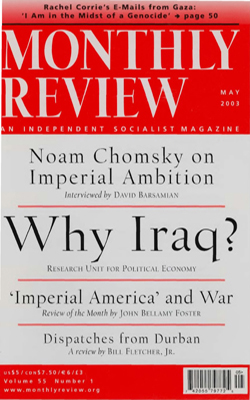