For a long time now it has been widely understood within economics that under the capitalism of giant firms, corporations no longer compete primarily through price competition. They engage instead in what economists call "monopolistic competition." This consists chiefly of attempts to create monopoly positions for a particular brand, making it possible for corporations to charge more for the branded product while also expanding their market share. Competition is most intense in what Thorstein Veblen called the "production of salable appearances," involving advertising, frequent model changes, branding of products, and the like. Once this logic takes over in twentieth and now twenty-first century capitalism it is seemingly unstoppable. All human needs, relationships and fears, the deepest recesses of the human psyche, become mere means for the expansion of the commodity universe under the force of modem marketing. With the rise to prominence of modem marketing, commercialism—the translation of human relations into commodity relations—although a phenomenon intrinsic to capitalism, has expanded exponentially. 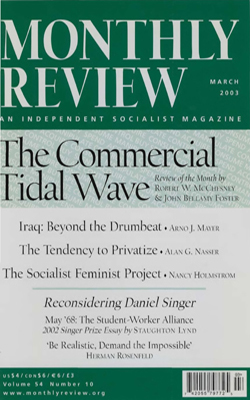