Notes from the Editors, October 2002

In late August and early September a number of MR and Socialist Register authors (including Patrick Bond, John Bellamy Foster, Gerard Greenfield, Naomi Klein, and John Saul) participated in forums in Johannesburg related to the World Summit on Sustainable Development. On August 24, they joined in a march led by antiprivatization activists from the black townships (in particular by Trevor Ngwane and Virginia Setshedi—whose role in the struggle in South Africa is discussed in Ashwin Desai’s new MR Press book, We Are the Poors). The march was organized to protest the arrest and jailing of political activists. The marchers lit candles and proceeded peacefully but were met within minutes by the South African police who exploded percussion grenades, injuring three of the protestors. The harsh and unprovoked actions of the police on this occasion pointed to the increasingly antipopular character of the South African state, which is imposing neoliberal economic policy on the society. It also underscored the repressive measures now commonly utilized at world summits in general. We will address the Johannesburg summit and the economic and environmental problems of southern Africa in an upcoming issue of MR 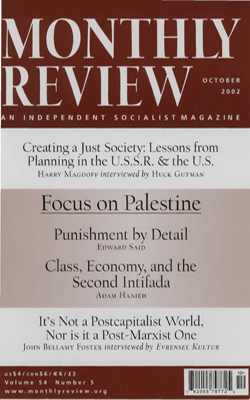