Notes from the Editors, January 2002

The U.S. news media coverage of the current war has again drawn attention to the severe limitations of our journalism, and our media system, for a viable democratic and humane society. The coverage has effectively been stenography to those in power, and since the Democrats have offered dismal resistance to or even interrogation of the war policies, uncomfortable facts that undermine enthusiasm for the war, and the broader wave of militarism it is part of, appear only briefly on the margins. Dissident opinions, as they do not come from elite quarters, are all but nonexistent in the premier media outlets. The most striking admission of the propaganda basis of U.S. journalism came from CNN, when it insisted that its domestic coverage of the war be sugarcoated so as not to undermine popular enthusiasm for the war, while its international coverage would regard the United States in a more critical manner; i.e. exactly as credible journalists should regard it 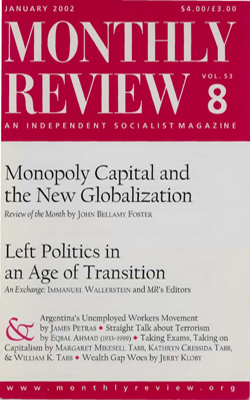