Postmodernism, Feminism, and Marx: Notes from the Abyss

For over a year now, the trial of O.J. Simpson has been headline news not only for the tabloids, but for the mainstream press as well. In the days following the grisly murders of Nicole Brown Simpson and Ron Goldman, the case was the hot topic on almost all television or radio talk shows; it appeared on the covers of popular magazines such as Time and Newsweek, and was featured regularly on the front page of major newspapers. Shock radio host Howard Stern, after playing the now infamous 911 tapes, suddenly discovered domestic violence, while millions of television viewers tuned in to watch the Los Angeles Police Department's stately pursuit of Simpson's white Bronco. 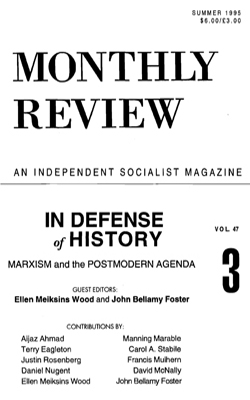