In the increasingly universal monopoly-capitalist economy and culture of the late twentieth century, people no longer need what they want or want what they need. Wants are artificially manufactured while the most desperate needs of innumerable individuals remain unfulfilled. Although labor productivity has steadily risen, the overall efficiency and rationality of society has in many ways declined. Indeed, it is almost impossible to arrive at any other conclusion if one considers the lavish office structures in cities like New York, Dallas, Atlanta, and Los Angeles, where employees use the most technologically advanced means to "develop" yet another laundry detergent, television commercial, or leveraged buyout, while on the ground below large numbers of people lack decent housing, food, clothing, medical care, and education; if one considers automated assembly plants existing in the same social space as millions of unemployed, partially employed, "discouraged," and poorly paid workers; or if one contemplates what it means to launch still another aircraft carrier, the total costs of which are equal to half the annual federal budget for elementary and secondary education. 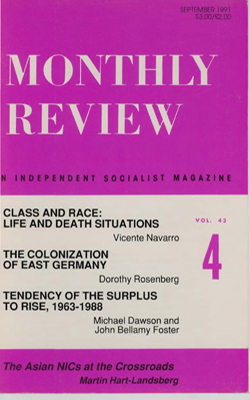