The Atomic Bomb, the Cold War and the Soviet "Threat"

Since shortly after the end of the Second World War, the media, the schools, our political leaders, and most of the churches have been presenting a version of postwar events intended to illustrate the Soviet "threat" Americans are supposed to fear. In February, 1945, at the Yalta Conference, the story goes, the Soviets had promised to promote free elections and parliamentary democracies in Eastern Europe. But Stalin broke his word and foisted ruthless dictatorships on Poland, Hungary, Bulgaria, Rumania, Czechoslovakia, and the Eastern regions of Germany and Austria, aiming to bring Europe, and ultimately the world, under Soviet hegemony. The U.S. has been forced to respond to this global Soviet offensive by sustaining and enlarging a worldwide military "defense" on behalf not only of itself, but of the entire "free world." 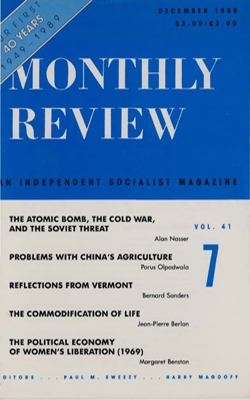