The Fetish of Fordism

It may seem strange that Henry Ford, an automobile manufacturer during the early decades of the twentieth century who died in 1947, should suddenly become a major source of contention among those interested in analyzing the contemporary crisis of the U.S. economy. The last few years, however, have seen a vast expansion of the Ford legend, particularly by thinkers working within the left, who have elaborated a whole new mythology of "Fordism," intended to sum up the political, economic, and cultural development of twentieth-century monopoly capitalism. Nowhere is this fetish of Ford and the ism now attached to his name more obvious than in Michael Harrington's latest book, The Next Left (New York: Henry Holt, 1986). 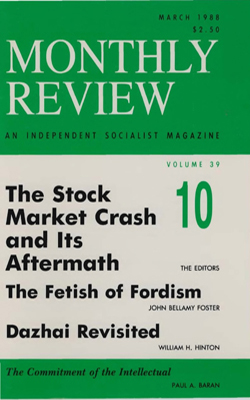