Only a few years ago the crisis in Central America—from the perspective of the Reagan administration—centered on El Salvador, which similarly occupied the attention of liberals and the left. The undisguisable brutality and the sheer level of horror perpetrated by the U.S.-backed government was a regular object of criticism and protest. Congress pressed for "certification" of human rights abuses and in 1981 over 100,000 people marched in Washington to oppose U.S. interference in that country. Today, on the other hand, there is little debate in Congress over the U.S. role in the Salvadoran war; liberal interest in El Salvador has largely vanished, displaced by increasing concern over the alleged threat posed by the Sandinistas. On the liberal left, many now devote their political energies toward defending Nicaragua while others are distancing themselves from the avowedly Marxist-Leninist Farabundo Marti Liberation National Front (FMLN). Indeed, the Reagan administration can count as one of its greater foreign policy achievements the disappearance of El Salvador from the center of "legitimate" political debate. 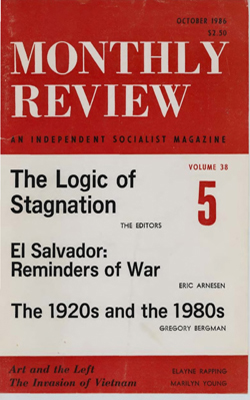