Is Monopoly Capitalism An Illusion?

The theory of capitalism's monopoly stage has had such a long and distinguished history that one could be excused for thinking of it as an established and non-controversial component of Marxian political economy. Indeed, the "neo-Marxian" theory of secular stagnation which developed out of the analysis of monopoly capital—notably, in the work of Michał Kalecki, Josef Steindl, and Baran and Sweezy—seems to have its direct confirmation in the current crisis of American and world capitalism. Quite recently, some of the "free-thinkers" among liberal economists, such as Lester Thurow, John Kenneth Galbraith, and Robert Heilbroner, have somewhat reluctantly added their voices to the diagnosis that capitalism is facing the possibility of long-term economic stagnation (which is also seen as posing a major theoretical crisis for establishment economics). Yet, at a time when nearly all of the conclusions of monopoly capital theory are finding dramatic support in the winds of historical change, the very notion of monopoly capitalism, and the entire Marxian heritage associated with it, is increasingly being "struck down from the rear" by radical theorists who claim to be more orthodox than Engels or Lenin. 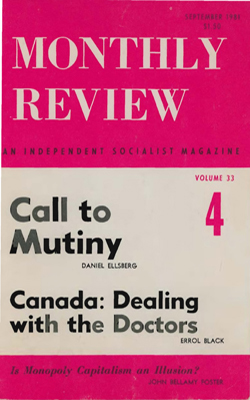