Marx and the Proletariat

Marx's theory of capitalism, which was sketched with broad and sweeping strokes in the Communist Manifesto and achieved its most comprehensive and polished form in the first volume of Capital, published just a hundred years ago, holds that capitalism is a self-contradictory system which generates increasingly severe difficulties and crises as it develops. But this is only half the story: equally characteristic of capitalism is that it generates not only difficulties and crises but also its own gravediggers in the shape of the modem proletariat. A social system can be ever so self-contradictory and still be without a revolutionary potential: the outcome can be, and in fact history shows many examples where it has been, stagnation, misery, starvation, subjugation by a stronger and more vigorous society. In Marx's view capitalism was not such a society; it was headed not for slow death or subjugation but for a thorough-going revolutionary transformation. And the reason was precisely because by its very nature it had to produce the agent which would revolutionize it. This is the crucially important role which the proletariat plays in the Marxian theoretical schema. 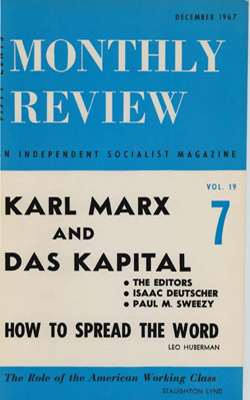