The Tricontinental Conference and After

In his closing speech to the Tricontinental Conference held in Havana during the first half of January, Fidel Castro launched a fierce attack on the Guatemalan guerrilla movement, "MR-13," led by Antonio Yon Sosa and on the Argentine journalist Adolfo Gilly who has probably done more than anyone else to acquaint the world with the character and achievements of MR-13. Since Gilly's most comprehensive reportage on the Guatemalan guerrillas appeared in this magazine (in the issues of April and May of last year), and since Gilly is also a frequent and valued contributor to Monthly Review, we are devoting a large part of this issue to printing the relevant part of Castro's speech and Gilly's reply, the latter taking the form of a general critique of the Conference itself. In this editorial we attempt to clarify MR's position on some of the principal issues in this politically very important controversy. 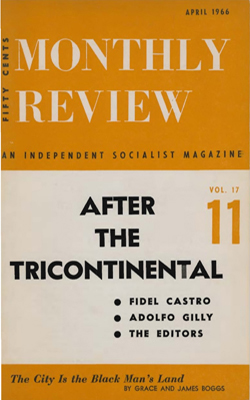