The Road to Ruin

The State Department's White Paper on Vietnam, released to the press on February 27th, is based entirely on one assumption, though it is not stated as such but is rather taken for granted as an obvious fact. The assumption is that there is a "legitimate government" (the term recurs again and again) in South Vietnam. This government is said to be trying to defend itself, and all the United States is doing is lending it needed assistance. If you accept this, you can hardly avoid the conclusion that North Vietnam is indeed guilty of aggression, though the scale is modest even on the showing of the White Paper itself. If you do not accept the idea that there is a legitimate government in South Vietnam, then the entire argument of the White Paper collapses and the facts which it adduces (assuming them all to be genuine) can only be interpreted as evidence of the remarkable caution and restraint of Hanoi in combatting a foreign occupier of a large part of Vietnamese territory. 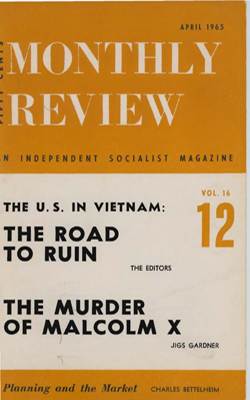