Yugoslavia strikes the foreign visitor as being, by Western standards, a very backward country, though it is by no means uniformly so—the spread runs all the way from the Central European level of Slovenia and parts of Croatia to the most retarded Asian standards of the Autonomous Territory of Kosovo-Metohija on the northeast border of Albania. On the economic side, this diversity is basically an asset since the more advanced regions can do much to assist the development of the rest of the country, but at the same time it is closely related to certain deep-rooted problems which inevitably slow down the rate of progress. In this connection, I need only mention here the division of the country into six major nationalities and a considerably larger number of smaller ethnic groups: it is hard for a person coming from an environment which is, in point of language and customs, relatively uniform to imagine the number and intractability of the problems created by this kind of extreme cultural heterogeneity. For this and other reasons, some of which I shall touch upon later, Yugoslavia has none of that air of a highly dynamic, rapidly developing economy which is perhaps the most striking characteristic of the Soviet Union. 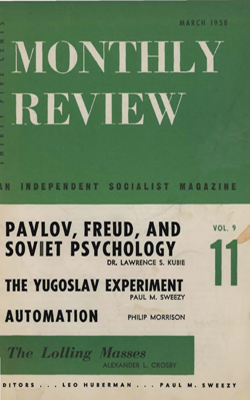